August 01, 2019: The reported death of Osama bin Laden’s elder son Hamza bin Laden, who was often described by the US intelligence community as the crown prince of terror, is unlikely to inflict much damage to al-Qaeda network, given the fact that Osama’s successor and the current chief of the global terrorist outfit, Dr Ayman Al Zawahiri, is still at large, being one of the two most wanted fugitives in the world.

Since the 9/ 11 terror attacks, the US State Department has offered a US$25 million reward for intelligence or information leading to Zawahiri’s arrest, amid conflicting reports that he was hiding somewhere on the Pak-Afghan border. And he continues to release audio and video messages frequently, being the operational and strategic commander of al-Qaeda. Thus, Hamza Laden’s reported killing will be nothing more than a symbolic loss for al-Qaeda. While the date and location of Hamza’s reported killing remain shrouded in secrecy, he was believed to have been operating along the Pak-Afghan border, which is a hotbed of Islamic militants linked with al-Qaeda, Pakistani and Afghan Taliban and Islamic State of Iraq and Syria (ISIS). While the death of Hamza has not yet been confirmed either by the US or al-Qaeda, the US intelligence community has been insisting for years that Hamza was being groomed by Zawahiri as al-Qaeda’s “leader in waiting.”

Considering Hamza as a valuable asset for al-Qaeda, the State Department had placed a $1 million bounty on his head on February 28, 2019 through its Rewards for Justice program. According to some recent American media reports, Hamza was killed in a US airstrike during President Trump’s first two years in office, much before a $1 million head money was announced for his arrest or killing. In its announcement of the monetary reward, the US State Department said that he was emerging as a leader in the al-Qaeda franchise and as a possible successor of his father. Hamza had made several public statements in recent years, urging followers to wage war on Washington, London, Paris and Tel Aviv and threatened attacks against the US in revenge for the killing of his father.

President Trump has neither commented nor tweeted about the reports of Hamza’s death, declining to answer questions at the White House during an appearance with the president of Mongolia. “I don’t want to comment on it. I don’t want to comment on that,” he repeated. And neither the White House nor the US State Department immediately responded to American media requests for details.

In recent years, Hamza Laden had become an increasingly prominent voice within al-Qaeda, first having been officially introduced to the terrorist group’s followers by the incumbent fugitive al-Qaeda chief Dr Ayman al Zawahiri in a 2015 audio recording. Zawahiri had described him as “a lion from the den of al-Qaeda.” Hamza’s debut audio was recorded sometime in May or June of 2015, before the Afghan Taliban announced that their founding ameer, Mullah Mohammad Omar, had died two years earlier. Following in his father’s footsteps, Hamza too swore allegiance to Mullah Mohammad Omar, by referring to him as the “Ameer of the Believers,” a title reserved for a Muslim caliph.

In his August 2015 audio message, Hamza bin Laden went on to honor the leader of each of al-Qaeda’s regional branches. In May 2016, Hamza released an audio titled, “Jerusalem is but a bride, its Dowry is our blood.” He argued that the jehad in Syria was the key to achieving victory in the Israeli-Palestinian conflict. Hamza called upon the worldwide community of Muslims) to raise a large army, drawing in “experts” who can wage war on Israel. In July 2016, al-Qaeda released another audio speech by Hamza wherein he argued that the number of mujahideen around the globe has grown despite a decade and a half of war. Hamza also threatened revenge for the death of his father, claiming that America has not yet witnessed al-Qaeda’s retaliation.

Hamza’s 2016 message was titled, “We Are All Osama.” In his last released video, released in March 2018, Hamza picked up on one of his father’s favorite themes, denouncing the founders of Saudia’s current monarchy as traitors to Islam. He blamed the Kingdom’s close ties with the US for the deaths of hundreds of thousands of Muslims, thus prompting the Saudi authorities to revoke his citizenship on March 1, 2019. Hamza was the son of Osama and Khairiah Sabar, one of the former al-Qaeda leader’s three surviving wives. She lived with him in a compound in Abbottabad where Osama was killed.

It is believed that Hamza bin Laden was aged around 30, with the US State Department listing his suspected birth date as sometime in 1989, but the department also lists an alternative birth date of 1986. Similarly, there are two different accounts of Hamza’s marriage. As per the first account, he was married to one of the daughters of a key al-Qaeda leader, Abdullah Ahmed Abdullah. A video of his wedding was found in the Abbottabad compound. But according to another account, Hamza’s family had claimed in an 2018 interview with the Guardian that he had married the daughter of Mohammed Atta, the leader of the Saudi hijackers who had carried out the 9/11 attacks.

Hamza was hardly 13 when Osama bin Laden walked him and his brothers to the base of a mountain in Afghanistan, following the 9/11 terror attacks and the subsequent invasion of Afghanistan, and said goodbye for the last time. It was September 2001 and planes piloted by al-Qaeda operatives had just slammed into the World Trade Center and the Pentagon, and another hijacked plane had been foiled on its way to Washington. Osama knew that retaliation was not far away and thus made arrangements to move his sons to a safer place. He handed each of them a set of Muslim prayer beads, reminding them to seek strength in their faith. Letters found from his Abbottabad hideout indicate that Hamza was living in Iran for several years, including in 2009 and 2010.

When the US Navy SEALs killed Osama bin Laden in May 2011 during a raid on his hideout in Abbottabad, Hamza was not found at the compound. However, letters seized from his compound suggested that the 9/11 plotter wanted Hamza to join him in Abbottabad so that he could groom him as his successor. The Americans have already made public some select letters to and from bin Laden dated between 2006 and 2011 that were recovered from his hideout and which give a partial view of what the fugitive al-Qaeda leadership was thinking and plotting during its years on the run. According to one such letter, feeling concerned about the security measures for his elder son Hamza, Osama had asked a senior military commander of al-Qaeda to facilitate the establishment of a safe house in Peshawar for Hamza.

Suspecting that Hamza and his mother were under watch, Osama had directed Atiyah Abd al-Rahman, a senior al-Qaeda commander [who had been operating from the Federally Administered Tribal Areas of Pakistan at that time] that the security of his son and wife should be given extra care. Bin Laden apparently felt that Peshawar was safe enough to hide one of his favorite son who was reportedly being groomed as the future ameer of al-Qaeda. As per the letter dated October 21, 2010, bin Laden had advised his chief of staff, Atiyah Abdal Rahman, to relocate his fighters from the Waziristan region to Afghanistan. He had then asked Atiyah to facilitate the establishment of a safe house in Peshawar for his son, Hamza bin Laden.

Osama wrote in his letter to Atiyah (who was eventually killed in a US drone attack in the border belt of Pakistan on August 22, 2011): “In your letter, you talked about your relationship with Abu-Salman al-Baluchi. I know that he is good Mujahid and got detained in the past, but some of the Baluchi people that he knows work for Pakistani intelligence. Therefore, I advise you to be careful and not talk to him about your news and secrets. Also, for that reason, my son Hamza should not be at his place or anywhere near him. Regarding Hamza and his mother, I wish you take all the security precautions that were mentioned before in order to disrupt surveillance on him. He should move only when the clouds are heavy. As for Hamza, if you find my companion that we talked about, please send him to Peshawar and the surrounding area and ask him to arrange a house that can hold two families in addition to his family. He should stay there with Hamza. If you did not find him yet, then please have a trusted Pakistani brother accompany him. Make sure to tell Hamza that I am of the opinion that he needs to get out of Waziristan if he is there, and he should not go there if he is not there. What I said regarding Hamza applies to Uthman and Muhammad if they come from Iran”.

The letter showed that Hamza and some other members of the bin Laden family had reached Pakistan from Iran where they had been living in a secret compound outside Tehran. Khairee Hussain, one of Osama’s three wives, six of his children, and 11 of his grandchildren had fled to Iran from Afghanistan before the 9/11 terror attacks. Khairee, who was bin Laden’s eldest wife, who had joined him at his Abbottabad compound hardly a few months before the US raid, is the suspected informer whose revelations led to the May 2011 American commando operation. During questioning by the Abbottabad Judicial Commission led by Justice (retd) Javed Iqbal, Khairee had conceded having crossed the Pak-Iran border, then heading to Waziristan from where she was taken to Abbottabad.

However, even after the 2011 Abbottabad raid, the American and Pakistani intelligence agencies not only remained clueless about Hamza bin Laden but also about his supposed safe house, if it was ever set up in Peshawar or any other part of Pakistan as per bin Laden’s desire. Well-informed sources in intelligence community had refuted some international media reports in the past that Hamza keeps moving in and out of Afghanistan and Pakistan, just like al-Qaeda chief Dr Ayman Al Zawahiri and many other key leaders of the terrorist group. In September 2007, it was reported by international media that Hamza was seen in the tribal belt that encompasses the Pak-Afghan border region.

In July 2008, a video featuring Hamza was posted on an al-Qaeda-linked website to mark the third anniversary of the July 7, 2005, London suicide bombings, calling for destruction of United States and United Kingdom. Hamza bin Laden was considered to be the spitting image of his father; in jehadi videos, the similarities in their facial features are accented by the camouflage vest, white turban, and automatic rifle he sports, so that he resembles a scaled-down, baby-faced version of the al-Qaeda chief. In a letter published by al-Qaeda in 2017, Hamza said that his 12-year-old son had been killed. The letter by Hamza did not narrate the circumstances of the death, but did make reference to martyrdom, suggesting that his son may have been killed in an airstrike. The letter was published shortly after a US drone attack in the Pak-Afghan border area in June 2017, which was meant to kill Hamza.

Despite widespread news in the American media about Hamza’s killing, no one is still sure of his death. Al-Qaeda, whose media arm is usually quick in announcing the death of a leader or a commander as a martyr, has not yet issued any confirmation or denial.

Amir Mir is a senior Pakistani journalist known for his research work on Islamic militancy and terrorism in Pakistan. He has authored several books including “Talibanization of Pakistan: From 9/11 to 26/11,” “The Bhutto Murder Trail: From Waziristan to GHQ,” “The True Face of Jehadis” and “The Fluttering Flag of Jehad.” He has also served as the Group Editor and Chief Operating Officer of several English and Urdu newspapers and Television channels respectively. 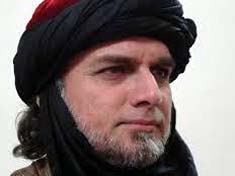 Lashkar-e-Jhangvi’s co-founder to be hanged today