ISLAMABAD: (Asia Times): Even though the selection of Mullah Akhtar Mansour as the Taliban amir after the death of Mullah Mohammad Omar had caused deep frictions in the Taliban ranks, they have moved swiftly this time to fill the gap, with the newly chosen amir, Sheikh Haibatullah Akhunzada, pledging to follow his predecessor’s policy of rejecting peace talks with the Afghan government.

In a two-page communiqué in Pashto, released to the media, the spokesman for the Afghan Taliban Zabihullah Mujahid conceded that Mullah Mansour had been killed in a drone strike by the “American tyrant” somewhere “between the border region of deserts of Kandahar and Baluchistan’s Nushki” district on Saturday (May 21). The confirmation came four days after it was reported that Mullah Mansour had been killed in an American drone strike in Nushki while returning from a visit to Iran. A Pakistani passport and national identity card found at the scene of the drone strike identified the deceased as Wali Muhammad. While President Obama had claimed that the man killed was Mullah Mansour, Pakistan has yet to confirm his identity, saying that the authorities are waiting for the results of the DNA test.

On the other hand, a statement issued by the Taliban spokesman Zabihullah Mujahid confirmed Mansour’s death: “After thorough deliberations, applying wisdom and taking into account all aspects of the religious and jihadi issues, the leadership council of the Taliban and its organs have nominated Sheikh Maulvi Haibatullah Akhunzada as its new amir and pledged their allegiance to him.” The Taliban statement did not say where the leadership council met but it is believed to have met somewhere in Quetta where Haibatullah Akhunzada has spent 25 years of his life in two spells – from 1979 to 1989 – and from 2001 to 2015. A relatively non-controversial figure, Haibatullah is a Noorzai Pashtun who is acknowledged as a religious person and a non-fighter.

The Taliban statement announced the appointment of Commander Sirajuddin Haqqani and Maulvi Mohammad Yaqoob as Haibatullah’s deputies. While Mullah Yaqoob, the son of Mullah Omar, is rather young and lacks fighting experience, his nomination is clearly aimed at keeping the Taliban united. As Haibatullah has no battlefield experience, the head of Haqqani network, Commander Sirajuddin Haqqani, would be calling the shots as far as the Taliban’s military strategy is concerned. Sirajuddin Haqqani, who is known as khalifa among the Taliban, is a ferocious commander who has masterminded dozens of deadly fedayeen attacks in Afghanistan in the recent years. The Taliban statement said all the Shura members pledged allegiance to Akhunzada at a safe place in Afghanistan. But according to the Taliban sources, some of the Shura members personally attended the meeting while others had sent their representatives.

Some of the Taliban leaders communicated their views via Skype and WhatsApp due to security concerns, especially after the droning of Mullah Mansour. Surprisingly, unlike the past, the succession was remarkably quick because Mullah Akhtar Mansour had left a will, naming Haibatullah Akhunzada to be his replacement in case of his death. In terms of age and seniority, Haibatullah is second only to Mullah Abdul Ghani Baradar, a key Taliban leader who has been under detention in Pakistan for the last few years after being arrested from Karachi. In fact, Haibatullah has a reputation of a respected religious scholar in the Taliban circles as he enjoys the title of “Sheikhul Hadith” – an expert in interpreting the words of the Prophet Mohammad.

The eldest son of an Afghan national, Maulvi Abdul Sattar Akhunzada, the new Taliban amir was born in the Sperwan area in the Panjwayi district of Kandahar, in 1966. Unlike his predecessors, he is not on the UN and US sanctions or terrorist lists and is largely considered to be a spiritual figurehead who is well versed in Islamic jurisprudence. He was close to both Mullah Omar and Mullah Mansour, as both had been regular visitors of his madrassah (religious seminary) in the Kuchlak town outside Quetta in Balochistan. Before joining hands with the Taliban, Haibatullah had been affiliated with the Hezb-e-Islami faction led by jihadi Commander Maulvi Younas Khalis who died in 2006. This is just like Younas Khalis, Haibatullah Akhunzada and Jalaluddin Haqqani used to live on the Pakistani side of the Afghan border in the late 1990s.

When the Taliban led by Mullah Omar brought the Nangarhar province under their control in September 1996, Younas Khalis had supported them because of his friendship with Haibatullah. After the fall of the Taliban regime, Khalis’ fighters regained their stronghold in Jalalabad where he exerted considerable influence. After the 1979 occupation of Afghanistan, Jalaluddin Haqqani had joined the Hezb-e-Islami of Younus Khalis. It was during this period that the Haqqani family built a strong relationship with the Pakistani military and intelligence establishment. As the aging Jalaluddin Haqqani is no more active, his son is leading the lethal militia which is giving sleepless nights to the Americans and the Afghan rulers.

The US, which has placed a head bounty of up to $10 million on Sirajuddin, has been pressuring Pakistan ever since the 9/11 terrorist attacks to take action against the Haqqani network. Yet Pakistan refutes the presence of the Haqqanis on its soil, since it treats them as a strategic asset which could be helpful in establishing a Pakistan-friendly government in Kabul. According to senior Pakistani journalist, Rahimullah Yousafzai, who is an expert on the Afghan affairs, the newly-chosen Taliban amir had moved to Pakistan along with his family members after the Soviet occupation of Afghanistan. He lived there from 1979 to 1989, before moving back to Afghanistan under the leadership of Mullah Omar. Haibatullah remained a judge of the Nizami Mahkama or military courts [between 1996 and 2001], first in Kandahar and then in Jalalabad, when Mullah Mohammad Omar was ruling Afghanistan. At that time Haibatullah used to hear complaints and allegations against the Taliban fighters for abuse of power and misuse of authority and passed verdicts based on the teaching of the Islamic Shariah.

After the fall of the Taliban regime in October 2001, he returned to Pakistan and once again started operating from Kuchlak district of Quetta. Being a close confidant of Mullah Mohammad Omar, who too was hiding in Quetta as a fugitive and leading his Quetta Shura, Haibatullah had played a central role in regrouping the Afghan Taliban after the group was ousted from power. Once the Taliban regained some strength with the help of Pakistani establishment and announced a shadow government against the US-backed regime in Kabul, Haibatullah was given the responsibility of looking after the judicial affairs. He was made the shadow chief justice of the Taliban Emirates of Afghanistan. During that period, Haibatullah reportedly issued many religious edicts or “fatwas,” justifying terrorist attacks against the US-led Allied Forces in Afghanistan.”

In 2011, Haibatullah became the prayer leader of a Deobandi mosque and was in charge of a madrassah [in Kuchlak area of Quetta] called Khairul Madaris. He used to deliver lectures there and was quite famous for his religious knowledge and oratory skills. He remained affiliated with Khairul Madaris till his selection as one of the two deputies of the Taliban chief, Mullah Akhtar Mansour, in August 2015. He subsequently played a key role in negotiating ceasefires among different belligerent Taliban factions earlier this year. Haibatullah stayed in the Kuchlak area of Quetta until the December 2015 assassination attempt on Mullah Mansour which forced him to relocate himself. Many analysts believe that by electing Haibatullah, the Afghan Taliban have managed to accommodate all racial, tribal, ethnic and sub-tribal actors that needed to be pacified since he comes from a very strong tribal background.

According to a May 25, 2016 report by Voice of America (VOA), “This is the most ideal set up that the Taliban could get as Haibatullah’s Noorzai tribe is one of the three big Durrani dynasty tribes. Founded in 1747 by Ahmad Shah Durrani, the Durrani Empire once extended beyond present-day Afghanistan to north-eastern Iran, eastern Turkmenistan, most of Pakistan and north-western India. The other two Durrani tribes are Popalzai, the tribe of former Afghan President Hamid Karzai, and Ishaqzai, the tribe of Mullah Akhtar Mansour and his military rival, Mullah Mohammad Rasul” said the VOA report while adding that Haibatullah’s selection could also be an attempt to take care of Mullah Rasul’s faction. In normal Pashtun circumstances, if Noorzais and Ishaqzais have joined each other, Mullah Rasul is bound to toe the line. Otherwise, he will be eliminated because the Noorzai tribe also commands support within large swaths of the Afghan Taliban.

Many security analysts in Pakistan believe that the appointment of Haibatullah would serve as a bonding force within the Taliban because Mullah Mansour’s appointment had triggered a rift in the Taliban ranks, with some commanders defecting to Daesh, and a major Taliban faction of Mullah Mohammad Rasul launching a parallel branch to confront Mansour. But with Haibatullah’s nomination, there are indications that the rift with Maulvi Rasul faction may be mending since the new Taliban amir comes from the traditional Taliban stronghold of Kandahar which is likely to please rank-and-file fighters. But at the same time, there are those in Taliban circles who question Haibatullah’s credentials, saying that he was neither a commander nor controlled any fighters and also didn’t have martyrs in his family.

But Haibatullah’s backers point out the fact that within an hour of his appointment as the new amir, a bus carrying court employees in Kabul was blown up in a bloody suicide attack, killing 12 people. The Afghan Taliban claimed responsibility, saying it was a revenge for the killing of their amir. In a related development, the new Taliban chief’s audio speech has been circulated on social media wherein he has pledged to continue the fight: “The Taliban’s enemies are singing on media that now that Mullah Akhtar Mansour has left the world, the Afghan Taliban would agree to reconciliation. I swear on Allah that those who call themselves Muslims, Mujahids or Afghans, will continue their ongoing fight”, Haibatullah Akhunzada added.

Amir Mir is a senior Pakistani journalist known for his research work on Islamic militancy and terrorism in Pakistan. He has authored several books including “Talibanization of Pakistan: From 9/11 to 26/11,” “The Bhutto Murder Trail: From Waziristan to GHQ,” “The True Face of Jehadis” and “The Fluttering Flag of Jehad.”

What made US tag Fazlullah a global terrorist? 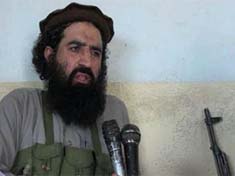 Shahidullah’s death: A setback for Daesh, relief for Taliban